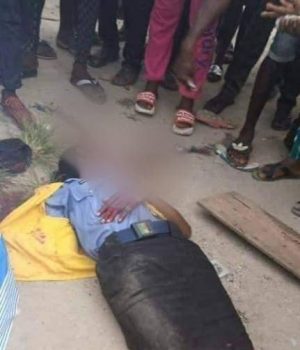 The Rivers State Task Force team policeman sergeant has killed his female counterpart who was attempting to enforce restrictions on movement to curb the spread of covid 19 pandemic in the State.
The policewoman was allegedly bent on stopping members of the Task Force team from destroying goods and properties of traders at Eneka town in Obio-Akpor Local Government Area of Rivers State, and was shot by a male sergeant colleague.

DSP Omoni Nmadi who confirmed the incident said that the police sergeant and two others have been arrested.