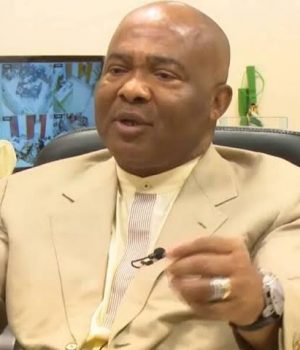 Following his recent reaffirmation by the Supreme Court as the duly elected Governor of  Imo State, Gov.  Hope Uzodinma, has been advised to make the interest of Imo paramount in all decisions by his administration.

The advised was contained in a statement by a journalist and Finland-based Coordinator, Imo Diasporas for Senator Hope Uzodinma 2019, Chief Nnanna Okere, while reacting to the Supreme Court’s reconfirmation of the governor’s mandate.

He said that the issue of who is the authentic governor of Imo State having been finally laid to rest by the Apex Court and without any more legal distractions over his mandate, Gov. Uzodinma should now focus on the delivery of the so called dividend of democracy by developing the state.

The political analyst and conflict management consultant also advised the Governor to run an all-inclusive administration by ensuring that he accommodates all interests and carries along even his political foes, in order to take the State to the next level of development.

Chief Okere, who is an ardent supporter of the candidacy of the flag bearer of the All Progressives Congress (APC) in the last governorship election in Imo State, Senator Hope Uzodinma even from his base in Europe, said that Uzodinma’s administration marks a new dawn in the development of Imo State.

He enjoined all Imo sons and daughters at home and in Diaspora to rally round the new Governor to ensure that he succeeds in repositioning the State for present and future generations.

Chief Okere who also hailed the performance of Hope Uzodinma since his emergence as Governor advised him to tap into the potentials of Ndi Imo in Diaspora, saying “We the leaders and members of Imo Diasporas for Senator Hope Uzodinma 2019, will like to recommend to the Governor the establishment of Imo Diaspora Commission to coordinate the interface between the State Government and the indigenes in the Diaspora.

This should be given top priority by his government, because people of Imo origin are in all corners of the world, making names for themselves and contributing to the development of their host countries. Imo too can tap from their expertise, experience and achievements.

According to him, when the Imo Diaspora Commission is established, it will serve as a resource centre charged with the responsibility of building a data base for all Imolites wherever they are in the world.

“This means that all people of Imo origin outside; professionals and all those contributing in one way or another to the development of their host countries, will be on the data base.  And, because they have been so registered, they can be engaged in various ways in the development of Imo State, even without having to leave their countries of residence,” he said.

As part of the project, he said that there might also be the need to allocate employment quota to Imolites in the Diaspora who have skills and want to return home to transfer their acquired knowledge, as well as embark on an investment drive designed to encourage those who have the means to come home and invest.