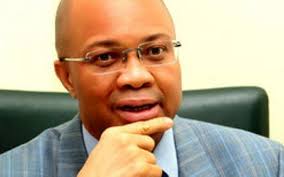 The Director General of the Budget Office of the Federation Pastor Benjamin Ifeanyichukwu Akabueze will serve another four years in his current capacity as the DG.
This was made known in a statement from the office of Minister of Finance, Budget and National Planning, Zainab Ahmed by her Special Adviser on Media and Communication, Yunusa Abdulli, on Sunday.
Ben’s appointment is due to expire on June 10, 2020 but is now extended to another four years as directed by President Muhammadu Buhari.
The confirmation came as tweeted by the Presidency, “President Muhammadu Buhari has approved the renewal of the tenure of Benjamin Akabueze as Director General of the Budget Office of the Federation. The Budget Office is currently undergoing several reforms under the leadership of Akabueze, towards improving effectiveness and efficiency.”
Pastor Ben’s journey into Aso Rock began in February 15, 2016 when he was appointed a Special Adviser on Planning to the President.
His brilliant performance and diligence saw him redeployed and appointed as Director General of the Budget Office same year in June 10.
Pastor Akabueze, a graduate of University of Lagos, is a seasoned economist who was the CEO of NAL Bank plc (now Sterling Bank Plc).
He was a two tenure Commissioner of Economic Planning and Budget of Lagos State when Bola Tinubu was the Governor

AS WE START LENT SEASON, WHERE DO YOU STAND?