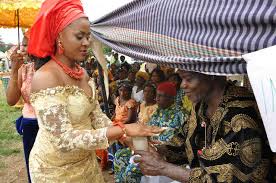 A young man returned recently from one of the popular Asian countries to look for a wife in Imo State. Off course, without prejudice to other states in the country, Imo is the state where you find the largest concentration of beautiful ladies. It is a fact that Owerri is the city with the largest collection of beautiful damsels per square metre in West Africa. So it is not unusual for brothers who just returned from “away” to head to Imo State in search of a wife.

So when this young man made up his mind that he wanted to settle down and after deciding it must be in Imo State, he met one stupendously beautiful young lady, fresh out of NYSC programme, having graduated from Imo State University with a second class upper degree. Both of them agreed they will marry.

So the guy told her there is no need to waste time as he is not here for friendship, that besides, he had little time to spend in Nigeria, that he would need to return back to his base in Asia to continue his “business”. The girl agreed. There is no need to waste time. The guy is well to do. He has completed his duplex in Owerri and is building one in his village. He drives a posh car and has wads of Naira to throw around. They both agreed to go and meet the girl’s parents for formal introduction.

On the day they agreed, the young man got himself ready. He bought exotic wines and told two of his friends to join him to meet his would be in-laws, with all the braggadocio associated with such announcements. He equally told his uncle to join him. The girl as well made small preparations since introduction is not a big ceremony in Igbo land.

When they arrived the home of Mr. T. C Onuoha, a retired school principal. The setting of the house was not too fantastic given the position the man had occupied in life. Mr. Onuoha had served in various capacities in the leadership of his community. He had served as the town union chairman and as the councilor representing his ward at the local government. So one had expected him to have a modern house. But that is not the character of Mr. Onuoha. Everybody in the village knows him as a no nonsense man,a disciplinarian, a Marxist and someone who doesn’t believe in primitive accumulation of wealth.

So when the young suitor arrived with his friends, he was ushered into Mazi Onuoha’s sitting room. Mazi Onuoha was swinging in his “easy-chair” reading one of the newspapers he bought the previous day. He welcomed them with less enthusiasm, unexpected of one receiving his would-be son in-law for the first time. Mr. Onuoha is not one for too much talk. He greeted his visitors and offered them kolanuts and a bottle of Seaman’s Schnapps from where he has been drinking himself. After that, he waited for them to introduce themselves and say what their mission to his house was.

The young suitor’s uncle was the first to speak. He told Mazi Onuoha their mission with all the proverbs and idiomatic expressions associated with such speeches in Igbo land. When he finished, Mazi Onuoha asked him who among the three young men accompanying him wants to marry his daughter. And he introduced his nephew with so much pride and air of arrogance.

He told Mazi Onuoha all that Chidi has achieved in a very short while he travelled abroad and how Chidi had suddenly become the beacon of hope in their community. As he was speaking, Chidi was smiling and grinning from ear to ear, with his golden earring sending a splash of light to announce it’s originality.

While the whole introduction was going on, Mazi Onuoha kept his face straight. No form of enthusiasm like a man about to have a rich in-law marry his daughter. At the end, it was his turn to talk. And his first question and the second one was like a thunderbolt.

At this time, there was grave yard silence in the room. Chidi’s face fell flat as he didn’t prepare for such a question. He had thought that mere telling the man that he lives in Malaysia should be enough. But he was wrong, not for a person like Mazi Onuoha.

To cut a long story short, Mazi Onuoha advised the young man to go home. Think about his question and come back with an answer that will convince him to give his daughter’s hand to him in marriage. Mr. Onuoha was emphatic in his declaration that until the guy says exactly what he does in Malaysia, that the marriage will not hold. LIVING IN MALAYSIA IS NOT A JOB DESCRIPTION.

Is it not amazing that most times, many of our people living abroad are so ashamed to tell us exactly the job they are doing abroad. Most of the time, all they tell you is; “I live in Yankee”. ” I live in Italy”. ” I live in South Africa”, but what they do for a living is shrouded in secrecy.

THE ISLAMIC PERSPECTIVE ON DIVORCE

27 YEARS IN MARRIAGE: BILL AND MELINDA GATES GET READY TO DIVORCE.

US PRESIDENTIAL ELECTION: UNCERTAINTY HOVERS ON THE AIR.