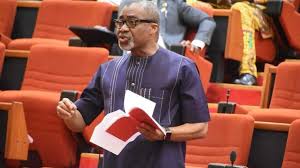 The appointment of the Chairman and the Secretary of the Board of the Federal Character Commission [FCC] violates section 14[3] of 1999 Constitution as amended.

The Senate Minority Leader, Sen. Enyinnaya Abaribe pointed out this when Sen. Danjuma La’ah who headed Senate Committee that looked into the appointment concluded his presentation.

Senator Abaribe drew attention of his colleagues to the lopsidedness in the appointment of Dr. Dankaka as the Chairman and the Secretary of the Commission. Many Nigerians have faulted the situation where Nigerians from the same part of the country occupy both positions of the chairman and the secretary at the same time.

The two principal positions in the board of the Commission had always been occupied on the basis of North and South. Sen. Abaribe therefore argued that over the years Nigerians from the North were being apppointed to head the Commission while the Secretary had always been from the South in line with section 14[3] of the 1999 Constitution as amended.

”Appointment of Mohammed Bello Tukur in 2017 as Secretary of the Commission by President Buhari, gave the impression that a new chairman would be from the South but the nomination of Dr. Muheeb Dankaka from Kwara State as the new Chairman violated the age-long principles of the Federal Character,” he submitted.

However, the Deputy Senate President, Sen. Ovie Omo-Agege said that Abaribe, by his submission, was challenging the powers of President Buhari on nomination and appointment of competent Nigerians into public office.

Sen. Omo-Agege however noted that the issue of balancing raised by Sen. Abaribe as regards the two principal positions of the Commission was germane. He expressed hope that the perceived anomalies would be corrected in months to come.

Meanwhile, the Senate yesterday confirmed the appointment of Dr. Muheeba Dankaka as the Chairman of the Board and 36 other members.

SCHOOLS WILL NOT REOPEN SOON – FG.