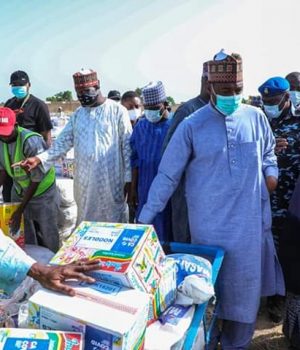 Borno Sate Governor, Prof. Babagana Umara Zulum on Monday revoked all allocations of houses that have remained unoccupied at Indimi Estate for more than a year, in Bama Local Government Area.

The Governor gave the order at the Shehu of Bama’s Palace on Monday when he spent his entire day looking out for the welfare of IDPs as he led Government officials in the distribution of food and non food items to those in critical need.

The estate, made up of 100 units of two-bedroom houses, was built by Borno’s billionaire business man, Alhaji Muhammad Indimi as part of support to his home state.

The houses were allocated more than a year ago with allottees holding on them without occupation.

“Borno State Government has revoked all allocations of houses at Indimi estate, we cannot tolerate a situation where people claim ownership of those houses while they are living in Maiduguri. Your highness, kindly compile the list of IDPs from Jaudari village, all the houses should be allocated to them” Zulum told his host, Shehu Umar Ibn Kyari Elkanemi.

The IDPs, now staying in Bama town, were mostly from villages sacked by insurgents in Banki, Gulumba, and Nguro Soye, all in Bama Local Government Area, Central part of Borno State.

“I want to sympathize with you, you have been in a very difficult situation. The insurgents have displaced you from your houses and communities, without any means of livelihoods” he said.

The Governor explained the source of food items he was in Bama to share.

“The food items you see here are jointly provided by the Borno State Government and the Federal Government. President Muhammadu Buhari is very compassionate about your plight. May almighty Allah bless him” Zulum said.

This, he said,was to enable primary school pupils continue with their education. “I will soon come back to Bama. I will personally supervise the enrollment of students. We have to reopen Government Day Secondary School. The mega school will also be converted to a secondary school, while a girls secondary school will be cited in Shettimari Primary School temporarily.” Zulum said.

Gov.Zulum has equally informed the Shehu of Bama of his Government’s plan to resettle Nguro Soye and Banki towns, all in Bama Local Government.

“We shall insha Allah resettle Nguro Soye and Banki towns. Our people in Menawo and Kirawa all in Cameroon will soon return back to Banki.” Zulum said.

Meanwhile, the Governor has commissioned solar energy plant in the State. This is the biggest of its type in the zone. Heaps of accolades have been flowing to His Excellency after the feat.