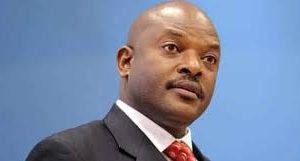 President Pierre Nkurunziza of Republic of Burundi has died. He was admitted to hospital on Saturday after feeling ill. His condition improved but on Monday, he had a cardiac and efforts to revive him were unsuccessful.

Late Prsiedent Nkurunziza had ruled his country for 15 years, having served three terms. He did not vie for last May’s elections, the first time in 15 years he did not run for the Presidency.

Seven days mourning, starting from Tuesday 10 June, 2020, will be observed for his death and repose of his soul.

Controversial Nkurunziza was widely criticized for his heavy-handed rule since he came to power in 2005. He plunged his country into chaos in 2015 by his decisions to run for a third term amidst widespread rejection.

So violence followed – killing over 1,200 people and displacing thousands as his government clamped down on his critics, even the media.

To pave way for him to run again in the May election, the Constitution of Burundi was amended for this effect but he later decided not to run again. He hand-picked Evariste Ndayishimiye who is to be sworn in in August this year. No time for his burial has announced by his government.

APC COALITION GROUP WANTS GBAJABIAMILA TO RESIGN AS THE SPEAKER.

IN THE SPIRIT OF CHRISTMAS: LIFT SUSPENSION PLACED ON ANAMBRA MONARCHS – CHIEF ONWUKA...

SOME ATTRIBUTES OF EXEMPLARY LEADERSHIP