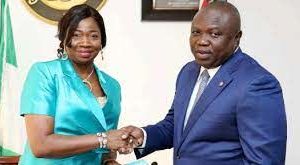 The death of Senator Bayo Osinowo, alias Pepper, on June 15, 2020, has created an opportunity for Abike Dabiri, the Director-General of Nigerians in Diaspora Commission, Akinwunmi Ambode , former governor of Lagos State, among others to test their popularity and relevance to their people in an election.

Leading the PDP tribe is Babatunde Gbadamosi who contested for governorship of Lagos under Action Democratic Party [ADP] and lost. PDP also has a lady who is interested in the post. Princess Abiodun Oyefusi; the last PDP flag bearer for the position is coming out again to contest. Mr. Adedipe Shobajo, a guru in Public Relations is also in the race.

The confidence of victory by PDP is sumarised by the Party’s Spokesman in Lagos State, Taofik Ganiu, who said, ”What is operating in the PDP Lagos now is that we are set for any election.

”For the Lagos senatorial district by-election, we want to field our strongest candidatewho will not be rejected by Lagosians. They are seven aspirants already.

”We are happy to note that a lot of the APC chieftains are making plans to to have us as a platform. We are aware that APC national body is endorsing somebody and other aspirants are aggrieved. So, our doors are wide open for them to take advantage of it.” He said that this is an opportunity for PDP to showcase her best hands before claiming the State come 2023 general elections.

KAGARA STUDENTS: SHEIKH GUMI FAILS TO CONVINCE THE BANDITS TO RELEASE THEIR CAPTIVES.