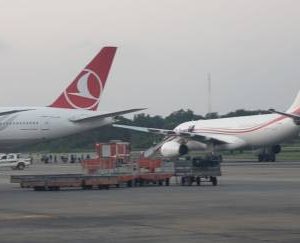 Information gathered disclosed that the Middle East Airlines airbus, while taxing, ran into Turkish cargo flight parked at the airport. Nobody was injured. However, the MEA airbus ripped off part of the empennage of the parked Turkish aircraft . Thus, the MEA airbus, which had been boarding passengers since 12.00pm had to disembark them.

A source at the incident disclosed that the Middle East Airline and others airlines, under the disguise of evacuation flights, had been carrying out commercial operations at the Airport.

The source said, ”These people have been running commercial flights under the disguise of evacuation. They come to this country [Nigeria] three times a week. The MEA and, even the Turkish Airlines and, others have been carrying out commercial operations.”

OVER MY DEATH WILL ODUDUWA, BIAFRA EMERGE AS NEW COUNTRIES, NIGERIA IS ONE –...

YOU’RE ON YOUR OWN – AREWA LAWYERS TELL NNBA MEMBERS.