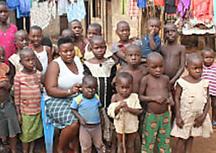 A Ugandan woman has earned the title as the most fertile woman in the country after she reportedly gave birth to 44 children.

According to reports, the woman, identified as Mariam Nabatanzi, had all her kids before she turned 40-years-old.

Nabatanzi, who resides in Kabimbiri in Uganda made the headlines in that country after conceiving six sets of twins, four sets of triplets, three sets of quadruplets. She also had a couple of single births.

According to OddityCentral, she lost a couple of her children, and only 38 of them survived.

Despite the challenge of managing a big family like hers, the single-mother manages to provide for all of them.

Nabatanzi was married off when she was just 12 and her hubby was 40-years-old. The woman escaped death from her stepmother, who attempted to kill her by putting tiny pieces of glass in her food.

According to Nabatanzi, her stepmother managed to kill four of her siblings that way. She added that she escaped her evil stepmother when she got married.

She was said to have had an abusive marriage. Nabatanzi said the man was also polygamous, so he had several wives and kids- whom Nabatanzi needed to take care of.

JAMB STOPS SALE OF FORMS DUE TO NIN MATTER.