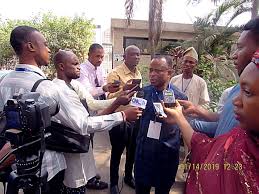 Anambra State and nine others have been warned to prepare for flooding this remaining part of the year to avoid loss of lives and property.

Other states in the bracket are Bayelsa, Deta, Edo, Kebbi, Kogi, Kwara, Nasarawa, Niger and Rivers. Communities bordering River Niger in these states are therefore advised to make adequate plans for timely evacuation of people to safe and high grounds in the event of flooding.

According to him, latest information received by the Agency (NIHSA) from the regional Niger Basin Authority (NBA) headquarters in Niamey indicated that, as at Saturday August 23,2020, the flood level was 6.60m, indicating a red alert zone.

”This current development portends some level of concern for Nigeria as there could be likelihood of flooding in the above mentioned states. This flood magnitude sighted in Niamey is expected to arrive Nigeria through Kebi State around September 6,” DG Onyeaso said.

He explained that Kainji Dam is now spilling water at the rate 1, 000m3/s, which is 86.4 million cubic meters/day confirming that the management of Kainji and Jebba dams have been alerted to take appropriate measures in the operation of the reservoirs.

The meaning of the observations, according to him, was that communities downstream Kainji and Jebba dams could be flooded. The Shiroro Dam on Kaduna River is still impounding, even though these is the possibility of spilling water in the weeks ahead.

The DG therefore enjoined states and local government, stakeholders, multinational companies, public spirited individuals and philanthropists save the country from the consequences of flood pandemic.

”The country still has many days of rainfall in the cause of the year. More floods are are therefore still expected in the months of August, September and October. In the event there’s release of excess water from the dams in other countries upstream rivers Niger and Benue this year, this will have more negative impacts on Nigeria which is located downstream other countries in the Niger Basin,” remarked the DG in Abuja yesterday.

To save the situation, Onyeaso advised that blocked drainage and gutters should be cleared and river channels should be dredged and structures within the waterways and floodplains and flood paths pulled down.