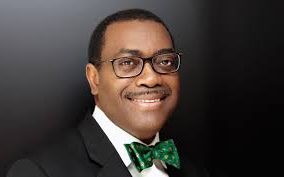 Filled with excitement, the newly re-elected President of African Development Bank (AfDB), Dr. Akinwumi Adesina has said that he is the first President of the Bank ever re-elected with 100% votes by members.

In his acceptance speech, the former Nigerian Minister of Agricultural and Rural Development under former President Goodluck Jonathan, thanked all, assuring them that more would be achieved.

”I am deeply grateful for the collective trust, strong confidence and support of our shareholders for electing me for a second term as President. It is yet another call for selfless service to Africa and the African Development Bank, to which I will passionately devote my myself.”

As the President, Dr. Adesina have another five years to run the African version of the World Bank. His victory came through 100 per cent votes of all regional and non-regional members of the Bank.

The election was conducted virtually on Thursday. Mrs Niale Kaba who is the Chairperson of the Board of Governors, announced the results of the election.

”As shareholders, we strongly support the Bank and we will give him (Adesina) all the necessary support to carry forward and implement his compelling vision for the Bank over the next five years,” said Mrs Kaba who was delighted that the Board of Governors had re-elected Dr. Adesina for another five year tenure as President.

Dr. Adesina was first elected President of the Bank on May 28, 2015 and will begin this new term of another five years on September 1, 2020. He was a Minister of Agriculture during the former President Goodluck Jonathan government.

According to News Agency of Nigeria (NAN), his first tenure was a focus on a bold and new agenda for the Bank Group based on five development priorities known as the High 5s.

The High 5s agenda were Light up and Power Africa, Industrialize Africa, Integrate Africa, and Improve the Quality of Life for the People of Africa.

On Wednesday, according to NAN, the President said that the Bank achieved impactful results on the lives of 335 million Africans, including 18 million people with access to electricity, while 141 million people benefited from improved agricultural technologies for food security.

MARGINALISATION: BUHARI TO APPEAR IN A N50B SUIT.