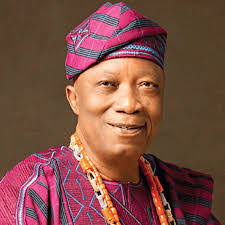 Sir Kessington Abebutu, owner of Premier Lotto, popularly called Bab Ijebu is under the net of the Central Bank of Nigeria (CBN).

The apex bank has frozen the account of his pools and betting company.

Investigation by Economic and Financial Crime Commission (EFCC) showed that Baba Ijebu’s Premier Lotto and other lotto operators were allegedly defrauding the Federal Government of Nigeria of tax payment of about N24 billion.

According to a circular dated September 4, the CBN’s Director of Banking Supervision, asked banks to place the accounts of the 38 companies on Post-No-Debt (PND) order.

”You are hereby required to place the under listed accounts on Post-No-Debt with immediate effect and revert with the account names, numbers, currencies and balances of all accounts placed on PND.”

Part of the circular went further to state ”Note that only the listed entities should be placed on PND, all related accounts are exclude.”

EFCC launched an investigation into the activities of Adebutu for alleged tax fraud and economic sabotage which made the apex bank to go after him, following the petition submitted by another betting company, Western Lotto run by late Senator Buruji Kashamu.

Reports have it that N5bn revenue that should have been remitted to the Nigeria Government was allegedly kept aside by the company. This was discovered by EFCC.

Betting companies in the country play sharp practices while some firms allegedly withhold funds from winning customers. Thus the probe might be expanded to include other betting firms.

It was revealed that Adebutu might have been punished for reneging on his agreement with the Federal Government to pay commission to the National Lottery Commission and Western Lotto as the sole licensed company to play Ghana game in Nigeria.

After a meeting that involved the Vice President, Prof. Yemi Osinbajo, SAN, Western Lotto management and Premier Lotto company, Baba Ijebu agreed to pay N24 to National Lottery Commission and N8 to Western Lotto on every 100 Ghana game played on Premier Lotto. He failed to remit this agreed commission as the sole agent in Nigeria.

Meanwhile, the late Senator Buruji Kashamu owned Western Lotto had paid N12 million to obtain license to play Ghana game in the country as the sole agent in Nigeria.

EIGHT NIGERIAN-AMERICANS DRAFTED INTO THE NBA.