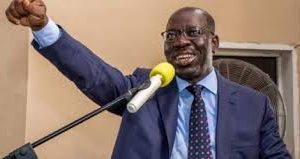 President Muhammadu Buhari was one of the first set of people to send him congratulatory message. The President equally thanked INEC and security agencies for making free with no violence and crisis.

In the same vein the All Progressives Congress (APC) in Edo State felt that the victory was for all Edo people and not PDP alone, sent in their message too. The letter came after receiving the certificate of return by the duo’

In the letter of congratulation signed by the Party’s State Chairman, Anselm U. Ojezua Esq., APC confirmed that, ”The election has been generally acclaimed to be peaceful, orderly and transparent. The people of Edo State have made their choice in a very clear and unambiguous manner.”

Ojezua, thrugh the letter disclosed that, ”Our (APC) loss at the poll stems from the needless and avoidable crisis foisted on the Party by a selfish, insensitive, arrogant and irresponsible leadership.”

The Party appealed to the Governor ,”to be magnanimous in victory” urging those who contested against him to sheathe their swords and put the elections behind them.

”We must all close ranks with the Governor in order to ensure seamless transition to the final lap of governance in the State without being subjected to any further needless distraction and rancour,” the letter read in parts.