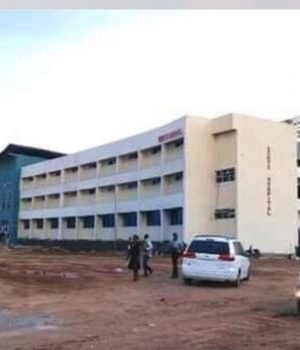 In memory of a young boy whose life was cut short by a stray bullet from a trigger happy police officer deployed to despatch off traders at the defunct Ekeukwu Market at Douglas Road of Imo State, the then governor, Owelle Anayo Rochas Okorocha built a state-of-the-art hospital and named it after his name SOMTO HOSPITAL. Former Gov. Okorocha used Imo State tax payers’ money to build the hospital located at the Douglas Road, Owerri. Structurally, the hospital had been completed only that necessary equipment remained for it to go into functional. However, just as the boy Somtochukwu was gunned down, the hospital built for his memory and named after him was demolished on Tuesday by the current Gov. Hope Uzodinma. It is this edifice that the current Gov. Hope Uzodinma got demolished on Tuesday, November 17, 2020.

Somtochukwu Hospital was one of the over 30 hospitals initiated or completed by the Okorocha administration in his eight-year-regime. They are among the big legacies the Okorocha administration His government kept to the advice offered by development experts and safety professionals by relocating the market. Thus he built new markete in Egbeada, Ubomiri, Nazi, Naze, Akwakuma, Amakohia and Ohi. His reason for relocating the market was that it was alleged to pose some security and health hazards, as well as disrupting the modernization and urbanization of Owerri, the State capital. More than 10,000 shops were built at these new locations to meet the surging demand by traders. However, the Uzodimma administration, in what some people believe is a misdirected political vendetta, ensured that some of the new markets are not occupied as he encouraged traders to return to the old market located in the heart of Owerri city.

The Governor’s action have been receiving condemnation from some concerned Imolites. Chief Joseph Nze, a community leader in Owerri saw the idea of demolishing the new hospital as an affront on the people of the State. ”This hospital and many other such structures built by the Okorocha administration were not built with the former governor’s personal funds, he built them with Imo State funds, public funds” He reminded Gov. Uzodinma that if he could go on demolishing the property his predeccessor left behind as a legacy, he should know that it was the tax payers’ money and efforts were being destroyed. He advised him not to go on a demolition spree of projects initiated by your predecessor, when he had not built any at all, he should know he was not fighting Okorocha, but fighting Imo people who had sacrificed to see their state as a solution.