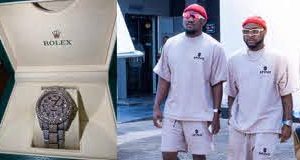 One of the richest Nigerian musicians, David Adedeji Adeleke popularly called Davido has bought a N15.2m ($40,000) Rolex wristwatch for his cousin Adetunji ‘Tunegee’ Adeleke. The top Nigerian singer has proven once again that he cares for his relations. The elated DMW boss’ cousin, Tunegee, has taken to social media to express his appreciation for the costly gift. The music star responded and said that his cousin deserved more than that.

Davido was born David Adedeji Adeleke in Atlanta, Georgia, in 1992 to a business magnate father Chief Deji and a university lecturer mother late Vero Adeleke. His interest in music began while attending Oakwood University in his late teens, and he started making his own beats and investigating music production. He dropped out of school and began pursuing music full-time, relocating to Lagos, Nigeria, and releasing his debut single, “Back When,” in 2011. The single received some attention for its mix of clubby production, high-energy vocals, and Afro-pop rhythms, and was followed shortly by second single “Dami Duro.” Work began on his debut album, Omo Baba Olowo, which was released in 2012 and produced a plethora of singles.

According to Fred Thomas who told story of the ace musician, success came quickly for Dvido and he sated his fans with a string of new tracks released over the next several years while he was working on his sophomore album, The Baddest, which was still unreleased as of 2020. Between 2013 and 2017, singles like “Gobe,” “Aye,” and “Pere” (among many others) piled up, sometimes featuring collaborations with bigger-name rappers like Meek Mill or Young Thug. Davido is an American-born Nigerian singer, songwriter, performing artist and record producer.