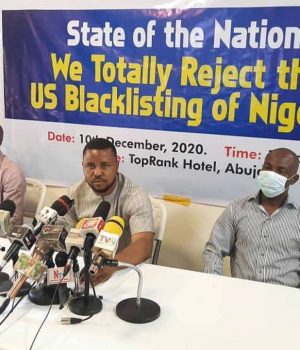 United States of America has been told to remove Nigeria from the list as one of the countries known for ‘systematic, ongoing, egregious religious freedom violations.’ Reacting to blacklisting Nigeria during a press conference on Friday in Abuja, Young Christian Forum of Nigeria, YCFN, through its President, Pastor Prince Gideon, declared that Nigeria was not a religious intolerant country, and therefore called for urgent removal of Nigeria from the list. The group said there is no record of religious intolerance in the country as averred by the US, and seriously frowned at the classification of Nigeria as a religious intolerant country.

It will be recalled that United State of America, through the Secretary of State, Mike Pompeo, blacklisted Nigeria along with other countries for ”engaging systematic, ongoing, egregious freedom violations.” Other countries included Burma, China, Eritrea, Iran, North Korea, Pakistan, Saudi Arabia, Tajikistan, Turkmenistan, Russia, Cmoros, Cuba and Nicaragua. It was recently that Sudan and Uzbekistan were removed from the list. The Youth Forum insisted during the cnference that Nigeria was not a religious intolerant country as claimed by US under the International Religious Freedom Act of 1998.

Nigeria had earlier denounced the listing and explained that the country instead would jealously protect religious freedom as enshrined in the 1999 Constitution and would take seriously any infringements on this right. In the same vein Christian Association of Nigeria, CAN, said that there was religious freedom in the country, the group however admitted that Christians were persecuted and discriminated against especially in the north where not allowed to hold certain public posts.

LIVE OR DIE: THE NEXT LEVEL OF COVID-I9 SOCIAL MARKETING COMMUNICATIONS By Joe Anatune