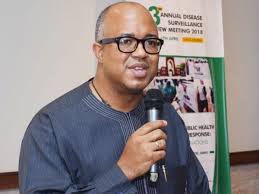 The Director – General of Nigeria Centre for Disease Control (NCDC) Dr. Chikwe Ihekweazu has raised alarm that there would be an outbreak of the dreaded covid-19 pandemic in the country as from January 2021.Speaking at the briefing of the Presidential Task Force (PTF) on COVID-19 on Tuesday, Dr. Iheakwazu said, “We just faced the worst week since we started responding to this outbreak. We had more cases in Nigeria last week than in any other previous week since the beginning of the outbreak. Pictures and videos from across the country paint a very disheartening situation because it appears that our messages, our appeals to Nigerians over the last few months have not been heeded and we have gone ahead with business as usual.

He said that the nation’s health system was struggling to cope with the increasing number of coronavirus infections daily and warned that the nation would pay in January for disregarding the health protocols.

“Events centres are full, social activities are full and so it is no surprises that cases are rising. January will be a tough month, no doubt about it. So, we have to brace ourselves for the consequences of the activities that we have decided to carry out in December.”

In the same vein, the Federal Government on Tuesday expressed disappointment with states, saying despite the resources made available to them, testing for COVID – 19 had been very low. The Chairman of the Presidential Task Force on COVID – 19, Boss Mustapha, speaking during the PTF press conference said with effect from January 1, 2021, the passports of the first 100 passengers that failed to take their day seven post-arrival PCR test would be published in the national dailies, while the passports, as deterrence, would also be suspended till June 2021.

“Reports received also point to the fact that laboratories recently established in the states are not working optimally. You will recall that we moved from two laboratories to about 90 (public and private) in all the states of the federation.

“Their inability to function optimally has resulted in unacceptable levels of delay in receiving results and the pressure on the National Reference Labs. We wish to urge all states to reopen all laboratories and ensure that testing is expanded and turnaround time for results is substantially reduced,” he said and remarked that week 52 had so far given the nation the highest number of infections in a single week.

“We are also seeing increasing transmission among younger people and this is not considered good and safe. We must therefore exercise utmost restraint by taking responsibility,” Mustapha said while stressing the issue of oxygen availability as critical to the success of case management. He disclosed that there was an ongoing review of the chain for the supply of medical oxygen for medical facilities across the nation.

The Task Force recently issued some protocols to states to which a number of states had been actively implementing, he commended the  states and urge others to follow suit and has worked out additional quarantine protocols to be observed by travelers arriving from the UK and South Africa.

“The new policy started from Monday, 28th December, 2020. Key changes include requirement from passengers for two additional documents, permit to travel/QR code obtained from the travel portal after payment for the day seven post-arrival test; and COVID-19 PCR negative test with a validity now shortened to 96 hours or 4 days,” Boss Mustapha said.