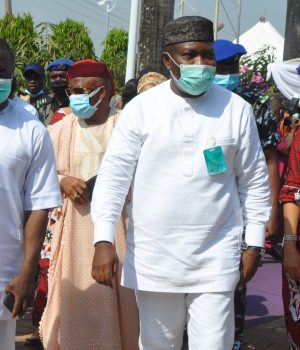 Governor Ifeanyi Ugwuanyi of Enugu State has urged the people of Oruku Community in Nkanu East Local Government Area to stay the course of peace, which his administration has strived to entrench and nurture in the State.

The Governor’s peace call followed the recent crisis that erupted in Oruku, which led to the killing of the traditional ruler of the community, late Igwe Emmanuel Chidiebere Mba.

Speaking during the inauguration of the Judicial Commission of Inquiry constituted by his administration to investigate and ascertain the remote and immediate causes of the crisis, Gov. Ugwuanyi said that the Government and people of the State received the sad news of the incident with rude shock.

Gov. Ugwuanyi disclosed that the State Government in the wake of the crisis swiftly directed deployment of security operatives to Oruku Community to stem the mayhem and forestall further loss of lives and destruction of property.

Reiterating his administration’s commitment to the security and welfare of the people, which is the primary purpose of Government as enshrined in the Constitution of Nigeria, Gov. Ugwuanyi acknowledged the efforts of the Chairman of Nkanu East LGA as well as the sincere concern shown by all the traditional rulers in the council area towards the restoration of peace in Oruku.

He noted that the traditional rulers made a strong request for the constitution of a Judicial Commission of Inquiry to unravel the persons and circumstances behind the unfortunate incident,

The terms of reference of the panel constituted by Gov. Ugwuanyi, in pursuant to Section 4(1) of the Commission of Inquiry Law, Cap. 24, Revised Laws of Enugu State 2004, include to ascertain the number of persons killed or injured, identify persons, groups or institutions who either by acts or omissions were directly or indirectly involved in, or sponsored the crisis, and investigate any other matter(s) that may come to the knowledge of the Panel in the course of the inquiry, not covered in these terms of reference.

The Governor therefore most solemnly charged members of the panel, who have eight weeks to complete their assignment, “to expeditiously and most sincerely discharge this onerous task which outcome will inform further Government’s actions on the Oruku crisis”.

Responding on behalf of other members of the Panel, the Chairman, Justice Eya, appreciated the Governor for finding them worthy to serve in the Commission and assured him that they would discharge the onerous task diligently with the help of God.

THE PROHIBITION OF DRUGS IS MORE STRINGENT THAN THAT OF ALCOHOL.

COVID19: MARKETS TO REOPEN IN ANAMBRA.