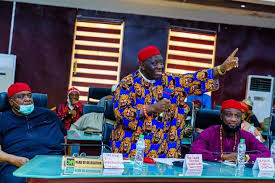 In a protest marred election of the President General of Ohanaeze Ndigbo, Amb. Prof. George Obiozor has emerged winner in the election held at Dan Anyiam Stadium, Owerri, Imo State capital on Sunday. The former Nigerian ambassador to the United States, Israel, and Cyprus, emerged to take from Chief John Nnia Nwodol of the Igbo socio-cultural group, Ohanaeze Ndigbo. He garnered 304 votes while his opponent, Chief Valentine Oparaocha got only 15 votes from the seven states, Ohanaeze Affiliate Associations Delegates and Ohanaeze Diaspora Delegates that voted in the election.

This is as other candidates like Dr. Joe Nworgu and Prof. Chidi Osuagwu contesting for the same position boycotted the election, even Chief Chuks Ibegbu who was 0ne of the leading contestants for the post of Secretary-General of Ohanaeze Ndigbo, announced his withdrawal from the election. Ibegbu, who is the outgoing Deputy National Publicity Secretary of the body, lamented that the election process was faulty and lacked proper democratic rules of engagement.

“Following obvious distortion of the proper democratic rules of engagement and feeling the pulse of the Igbo Nation, I hereby exclude myself from the Nwodo led Ohanaeze election.Though I purchased the nomination form at an unacceptable sum of N300,000, regrettably the process was full of manipulation and the outcome would not be acceptable to Ndigbo,” he lamented.

Nworgu and Osuagwu pulled out of the election, citing various irregularities, including that the process was not transparent. Dr Joe Nwaorgu and Prof Chidi Osuagwu said they would not be part of the process. This was as the Alaigbo Development Foundation (ADF), Prof Pat Utomi and some other personalities called for the postponement of the exercise. Speaking in Owerri, Nwaorgu noted that he made up his mind to withdraw from the race after a deep reflection of alleged abnormalities being introduced into the election. He alleged that the electoral committee was not following the Constitution of Ohanaeze.

”I have decided to disassociate myself from what was reoccurring, I will not contest in the firmament, the election process is flooded with non-compliance with the tenet of the Constitution of Ohanaeze, I will not contest that election in the present circumstance,” he said.

In his own view, Osuagwu said that he took the decision following the outcome of concerned Ime-Obi members’ virtual meeting on Thursday, which held that the election should be suspended for failure to adhere to constitutional procedures and import of politics into the election. He further claimed that the Ime-Obi in its submission requested the outgoing President General of Ohanaeze, Chief Nnia Nwodo, to hand over to the Southeast Christian Association of Nigeria (CAN) to run the affairs of the association for two months before conducting the election.

The ADF’s Working Committee after its emergency meeting on Saturday, urged Igbo patriots to boycott the proposed election on Sunday. A statement by its President, Prof Uzodinma Nwala; Chairman, BOT, Bishop Obi Onubogu; and Chairman, Media and Publicly Bureau, Chief Abia Onyike, among others, said that the process was manipulative.They urged the Nwodo leadership and the Electoral Committee to respect the views of the Global Igbo Leaders and some concerned Ime-Obi members.

“There is yet no reaction to the several objections to the modalities being put in place for the election, as well as the obvious omissions in organizing a credible Ohanaeze election. Failure to respect these popular views of Igbo leaders, ADF Working Committee enjoins all Igbo patriots to reject the outcome of any election that does not represent and respect the popular views of the leadership and people of Alaigbo,” ADF stated.

Utomi said that the whole Ohanaeze fiasco spoke sadly to the values of Ndigbo. He wished that the election was postponed in honour of Prof Ebere Onwudiwe, prominent Igbo patriot, who passed on in the early hours of Saturday. Utomi said: “I am proud that Anioma people showed the Igbo nation an example in the way they allowed me manage the Anioma turn which produced Ambassador Ralph Uwechue as PG.

“I wish we could honour the memory of Prof. Onwudiwe who loved the Igbo nation dearly by postponing these elections and resolving these issues with the dignity of the Igbo nation foremost.”

In another development, a group being fronted by embattled Secretary General of Ohanaeze, Uche Okwukwu said on Saturday that it has formed a parallel leadership. A former Commissioner in Imo State, Chief Chidi Ibeh has allegedly emerged factional President General of Ohanaeze Ndigbo. Ibeh was reportedly elected at a parallel election organized by the Prince Richard Ozobu-led election committee. Also, Okwukwu was elected Deputy President General. Okwukwu who hails from Rivers State was until his suspension by the Nwodo-led executives the Secretary-General of the Igbo apex organization. Chief Okechukwu Isiguzoro from Abia State was also elected Secretary General.

Speaking on the outcome of the election yesterday, Chief Ozobu told journalists that it was held in Enugu under strict observance of COVID-19 protocol. “We promised to give Ndigbo credible election and that is what we have done. A new leadership of Ohanaeze has emerged and it was in compliance with the Constitution of Ohanaeze. We met all the requirements.

“We are still collating results for other seats, but the key leadership positions are ready. It started late Saturday night and was concluded this this Sunday morning. Many delegates participated through zoom because of ban on large gathering owing to COVID-19. “The rest of the National Ohanaeze Executive election results will be released after further verification to ensure that the Constitutional provisions were fully met.”

How the votes were cast was not explained and names of contestants of other positions are yet to be public at the time of filing this report. It will be recalled that former Governor f Imo State, Chief Ikedi Ohakim had threatened to take legal action against Okwukwu and Ozobu should they went on to hold parallel election in their alleged Ohanaeze election.

RIGHTS OF THE NEIGHBOUR