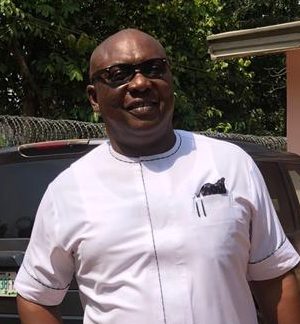 The President of Abagana Welfare Union (AWU), Lagos Branch, Engr. Ben Okongwu, has expressed implicit confidence in the abilities of the newly elected Deputy Vice Chancellor (DVC) Administration of Nnamdi Azikiwe University, Awka, Prof. Joseph Ikechebelu to discharge his duties creditably.
Speaking to The NationGuardNews.com in a telephone interview, Engr. Okongwu who is the Chairman/CEO of BVC Ltd, Lagos, charged the new DVC Admin of UNIZIK to toe the line of the pioneer Vice Chancellor, late Prof. Festus Aghagbo Nwako, who gave the citadel of learning a sound footing.
According to him, since late Emeritus Prof. Nwako was a Paediatric Surgeon per excellence and Prof. Ikechebelu is a gynecologist extraordinary, and both from Abagana, nothing less than perfection would come out of him.

”Being a stickler of excellence, God endured him with altruism, sagacity and rich sense of equity. His antecedence in managing both man and material resources convinced those who voted him into this new position, and he won’t take such trust for granted. His clarity of purpose, humility and ability to add values to humanity have fetched him honours.”

President Okongwu however lamented that endless strike actions by those in the citadels of learning have hampered and stifled steady youth development in the country. Many youths, he said are frustrated, confused and rendered hopeless and helpless by the continuous industrial actions of lecturers in the country. He disclosed that the ugly situation has led many youths to taking such crimes as yahoo yahoo, armed robbery, kidnapping, drug trafficking, cultism, drug addiction, prostitution, etc. Such social problems, he suggested, could be reduced if not eliminated by keeping the youths busy in their studies. ”It is a sure way of redeeming the rich potentials of our youths,” he advised.

He remarked that strike actions by university staffers have worsened the woes of youths who not only do not get jobs after graduation but were made not to graduate at all. He therefore called on both the Federal Government and universities’ leadership to come up with a lasting solution since an idle mind is a devil’s workshop.

Engr. Okongwu assured Prof. Ikechebelu of full support of Abagana community through prayers and advice in making his tenure successful as he uses his lofty position to cultivate positively the mindset of Abagana youths in particular and those of the nation in general.
In his own congratulatory message, a community leader of the town, Chief Romanus Ezekwe (Okobi Abagana), expressed confidence in the abilities of new DVC administration. He said, “Vice Chancellorship is for accomplished academics. Prof. Joe is not only a very high-flyer in Obstetrics and Gynaecology but now occupies a launch pad position for the future Chief Executive of his University.”

Responding to avalanche of goodwill messages received from friends, brothers, sisters, colleagues and Abagana indigenes both at home and in Diaspora, the new UNIZIK DVC thanked and prayed God to bless them all asking Him to make His light shine on them continually.

“I am overwhelmed at your love and prayers at a time like this. Thank you for the show of love and friendship. I will continue to fly high the flag of this great University. We will continue to rise together,” he pledged.

MAN THROWS DOWN HIS LOVER FROM FIVE STORY BUILDING IN ANAMBRA.