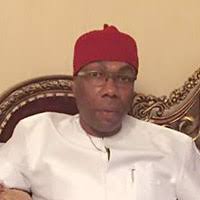 As part of the coronation ceremony, His Royal Majesty, Oba Abdulsemiu Orimadegun Kasali, the Adeboruwa of Igbogbo Kingdom, has conferred a historical chieftaincy title on Eze (Dr) Okechukwu Anorue, as the Bobagbimo of Igbogbo Bayeku kingdom.

According to HRM Oba Kasali, the chieftaincy title of Eze Okechukwu Anorue, was conferred based on his leadership competency, integrity and developmental impacts he made in his community.

“It is a well deserved title. I have heard so much about him by the people in the community. He is described as a man of integrity and respect. Even some members of the council of chiefs gave their support for the coronation. When majority of people speak good about a person, then there must be an atom of truthfulness in it. This is why I did not hesitate to confer on him the title after thorough screening. I employ everyone to support him with prayers and encouragement during his reign to enable him perform as expected.”

The Oba further stated that any person conferred with a chieftaincy title in Igbogbo kingdom must be of impeccable character, adding that the traditional cabinet of the palace, rigorously investigated the lifestyle and activities of the newly conferred title holder and found him culturally inclined and traditionally oriented.

The newly crowned, Eze (Dr) Okechukwu Anorue, expressed gratitude to God Almighty and to the Oba for the great honour in Igbogbo kingdom. He also thanked the Igbogbo Council of Chiefs as well as the invited guests who took out time to facilitate with him.

Eze Anorue promised to foster peace and unity between the Yoruba and Igbo ethnic groups in the community with his leadership skills and developmental activities.

“I and my wife specially thank HRM Oba Kasali and the Igbogbo Council of Chiefs for this rare privilege. I am honoured to be conferred with this title in a prestigious kingdom and by a prestigious traditional ruler in the person of HRM Oba Kasali. I want to assure everyone that by the grace of God and with your support and prayers, I shall use my office to promote the cultural values of the Igbo and Yoruba groups in the community. I humbly appeal for your encouragement to enable us continue with community development at the grassroot level. Thank you and may God bless you all,” Anurue said.

For Chief Sir Cyril Sunday Eze, President-General, Igbo-Speaking Community, Lagos, who described the newly installed chief as a man of the people. He also noted that the title has proven that the presumed tribal war between the Yoruba and Igbo ethnic cultures has become a thing of the past.

“Eze Okechukwu Anorue is a good man. He deserves the honour and recognition. I am sure that he will continue with the good works he has been doing for the people at the grassroot level. I am not surprised that he was chosen by the people and fully supported by the Igbogbo Council of Chiefs to be conferred with such prestigious title. I specially thank HRM Oba Abdulsemiu Kasali for giving our illustrious son this magnanimous recognition. It’s an achievement to the Igbo-Speaking Community and we assure him that we shall continue to foster peace and unity amongst the Igbo and Yoruba tribes in Lagos State at large,” he stated.

DEMOLITION OF SOMTO HOSPITAL: GOV. UZODIMMA ON A VENDETTA MISSION?