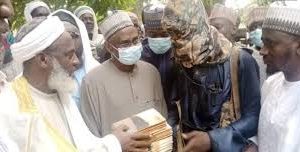 A former aide to ex-President Goodluck Jonathan, Reno Omokri, has said the Nigeria Police Force and the Nigerian Army were yet to locate bandits terrorising Nigerians whereas popular Islamic Scholar, Sheikh Abubakar Gumi; Zamfara State Governor, Bello Matawalle; and his Katsina State counterpart, Aminu Masari, have been negotiating with the criminals.

Omokri, in a Facebook post on Saturday, said the security agencies instead of neutralising the bandits with fire power, have chosen to go after the operatives of the Eastern Security Network, the paramilitary wing of the Indigenous People of Biafra.

He wrote, “How is it that Sheikh Gumi can jump into forests in Zamfara and Niger, and locate the whereabouts of bandits and killer herdsmen, but both the HQ Nigerian Army and Nigerian police can’t locate and exterminate them? But they can locate and determine ESN that don’t kill.

“It seems everyone has access to bandits and killer herdsmen, except our Army and Police. Those ones only know how to find and kill ESN!”

The PUNCH had earlier reported that photos of Gumi meeting with some bandits in a forest in Niger State surfaced online on Friday. He had met them with respect to the abduction of students and members of staff of Government Science College, Kagara. The cleric, who briefed the press later in Minna, had described the meeting with the bandits as “positive”. Gumi had also met with bandits in the forests of Zamfara and some other places after which he sought blanket amnesty for the criminals.

Culled from The Punch

HOMOSEXUAL LOBBY IN THE VATICAN.