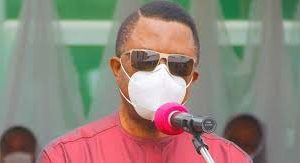 … AS NEW REGIME LED BY BARR TITUS AKPUDO IS INAUGURATED.

Gov. Willie Obiano of Anambra State has enjoined the president-generals of various communities in the State to sensitize their people about the second wave of Covid-19 pandemic which is taking toll on people known individually. Gov Obiano, represented by his Deputy, Dr. Nkem Okeke, who was speaking during the inauguration of a new regime of Association of Anambra Town Unions (ASATU), emphasized the need for anyone who was indisposed visit any government hospital to get tested for Covid-19 for free test and treatment, if positive.

The Governor admonished them to equally maintain peace in their various domains and to report any strange happenings immediately to the State Government, reaffirming the need for the PGs to work harmoniously with their respective traditional rulers for the collective good of the community and the State.

The new leadership of ASATU led by Hon. Barr Titus Akpudo was elected on 30th December, 2020. Representative of Archbishop Ibezim Anglican Bishop of Awka Diocese, started the ceremony with prayer of wisdom from God and love on the president-generals of various community to support the new ASATU leadership. He called for spirit of brotherhood and unity ”Onye Aghana Nwanne Ya” in order to garner collective efforts to build the homeland.

Chairman of the occasion, His Royal Highness Igwe Surveyor Charles Agbala Igwe Oranyelu 111 of Uke, while breaking the Kolanut prayed for the successful administration of the new executive members of ASATU.
The monarch appreciated the immediate past executive leadership for conducting a free and fair election thereafter handing over.

In his speech, Chief Damian Okeke Ogene (Mbuze Nanka) Chairman Board of Trustees (BOT) ASATU and former Chairman of ASATU (2000-2003) recalled the beginning of ASATU through the efforts of Chief Barr Chimezie Ikeazor (SAN) OON (Oboli Obosi) and founder of ASATU, for putting communities in the State together. He equally appreciated the efforts and support of Anambra State Government for recognizing town unions as fourth level of government in the State and giving each community N20 million for ‘The Choose Your Community Project’. He eulogized past leaders of ASATU for keeping the association united and for building of Barr Chimezie Ikeazor ASATU Auditorium which was to serve as meeting point, admonishing the new leadership to complete the Auditorium.

In his parting speech, Chief Ambassador Alex Onukwue (Ezimmili Aguleri) the immediate past executive President of ASATU before stepping down thanked his Exco members, ASATU Women and Youths including stakeholders within the association. Appreciating the dynamic leadership of His Excellency Gov Willie Obiano for the success story of the N20 million initiative which is in the 3rd phase He equally enumerated some of the achievements of the out-going ASATU Exco, colloboration with Anambra State Council of Traditional Rulers and Otu Subakwa Igbo in promotion of Igbo language and culture, the realization and launch of Biko Suba Igbo Emblem.”

Other feats his regime achieved, according to him, were association’s fully connection on the internet with its website www.asatu.com.ng ”to ensure our communities are not left out of the benefits of the information age;
”the International Press conference called by ASATU in May 2020 to denounce the shipping of Almajiris from Northerner Nigeria to South East Nigeria during the wave of Covid 19 Pandemic which stopped the ugly practice immediately after the press conference, among others.
In his acceptance, the new President-General, Hon. Chief Titus Akpudo Esq (Ichaka-Egbe Eji Egbu Agu), after his citation was read by Amb. Jeff Ubah, thanked the out-gone ASATU leadership under Amb. Alex Onukwue for conducting a transparent election and equally contestants who took the win and loss in good faith without recourse to any litigation.

While thanking the State Government for supporting the association, he assured that the leadership of ASATU would swing into action immediately by going round the State with the view of resolving issues in various communities where such existed. The erudite lawyer assured that team work and consultations with the predecessor regime would top his administration’s priority. Highlights of the occasion were oath taking and swearing-in of new members.

ADESINA: THE FARMER, HIS BOWTIE AND THE STORM IN A TEACUP.