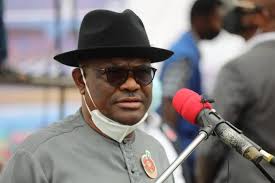 Rivers State Governor, Nyesom Wike, has said Nigeria must address the menace of drug abuse in order to overcome the security challenges bedeviling the country. Gov.Wike made his position known when he received in the audience, the Chairman/Chief Executive of the National Drug Law Enforcement Agency (NDLEA), Gen Mohamed Buba Marwa (retd) in Port Harcourt, Rivers State.
Marwa’s visit to Wike was on the sidelines of his tour of the NDLEA Commands in Rivers State. Wike maintained that Nigeria could not continue to fight security challenges without addressing the problem of drug abuse as a major root cause.
“As the government is fighting insurgency, rape, banditry, kidnapping and other security challenges, we must not look away from drug abuse as the root cause and if we succeed in cutting down the supply of illicit drugs, we would have substantially solved the problem of insecurity in the country,”

The Gov. added that with the personality and antecedents of Marwa in public service, he had no doubt that Marwa would succeed as NDLEA Chairman if given all the necessary support by the authorities and all stakeholders.
“I have no doubt that the magic you did in Lagos as a military administrator, you will replicate same in NDLEA if given the necessary support by the authorities and all stakeholders,” Wike added.
Wike further announced a donation of some vehicles to enhance the operations of the State Command of the NDLEA, even as he promised to help build a rehabilitation centre for the NDLEA in Port Harcourt.
In his earlier remarks, Marwa said he started his tour of the NDLEA Commands in Rivers because of his affinity to the State, having started his military career in the state after graduating from the NDA in 1973.
Marwa added that as the Mene Yereba 1 of Ogoni Land, he was very much at home in Rivers State.
He commended Governor Wike for the great job he was doing for the people of the State and his support for the war against drug abuse.
“As a student of Public Administration with a Master’s degree from Harvard University and practised same as military governor in Borno, as well as a military administrator in Lagos and having served under seven Nigerian Heads of state, when I see a performing governor, I know and today I’m in front of one,” Marwa said.
Marwa restated that behind the security challenges facing the country was the problem of drug abuse and as such, he was not going to spare any effort to fight those involved whether as users, peddlers, traffickers, or barons.

I AM THE FIRST PRESIDENT OF THE BANK TO BE RE-ELECTED BY 100% VOTES...