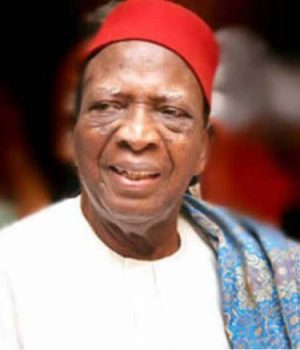 The Anambra State Government has congratulated Africa’s foremost constitutional law scholar, Professor Ben Nwabueze, on the attainment of 90 years of age, describing him as a global treasure. In a message signed by Governor Willie Obiano, the Anambra State Government said that Professor Nwabueze is “a genius well recognized at Harvard University and other key centres of learning around the world.

In a press release signed by the Commissioner for Information and Public Enlightenment, C. Don Adinuba, and made available to the nationguardnews.com, Gov. Obiano described the erudite Law Professor as probably the world’s greatest Constitutional Law thinker alive at least in the English-speaking world.

Chief Obiano recalled how the Supreme Court of Nigeria decades ago officially proclaimed “Nwabueze the leading authority on constitutional issues throughout Africa.

“The Government and people of Anambra State are truly grateful that at 90 years of age, Professor Nwabueze is not only alive but reasons most profoundly, and writes so enchantingly, lucidly and logically. The flourish of his writing is matchless.

Gov. Obiano extolled Nwabueze, the former Minister of Education, for authoring over 30 books and over 100 academic articles.

Nwabueze, according to Governor Obiano, became one of the few persons in history to receive the PhD of the University of London, where he had earlier earned a Bachelors’ degree in Law with distinction, based on his globally influential publications.

“He got this rare Doctorate on the publication of his third book on the presidential system of government in Africa”, Obiano declared.

The Governor commended Nwabueze for his role as the founding Secretary General of Ohaneze Ndigbo, the pan Igbo organization.

“Thanks to the heroic efforts of people like Nwabueze”, said the Governor, “Ohaneze has been growing from strength to strength decades later”.

He also praised Nwabueze, Nigeria’s first academic to be bestowed the honour of being made a Senior Advocate of Nigeria (SAN), for leading the Igbo Leaders of Thought group which on December 9, 2019, declared Governor Obiano the “Star of the East”, urging him to share the secret of his success with his brother Southeast governors”, after reviewing such legacy projects as Anambra International Cargo Airport and the 10,000-capacity International Conference Centre in Awka, the biggest in Africa.

Chief Obiano recalled how the foremost lawyer has been working with various organizations and eminent Nigerians across the country to create a better society, including the late Chief Fredrick Rotimi Williams, Nigeria’s preeminent lawyer.

“Not to be forgotten”, noted the Governor “is Professor Nwabueze’s role in the constitutional development of a number of African countries, including Ethiopia which became a federation a few years ago as a result of the wisdom and sagacity of such people as this great Anambra indigene”. 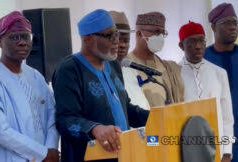 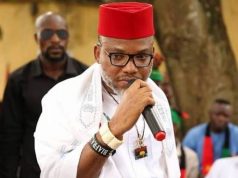