One of the leading governorship aspirants for the November 6, 2021 Anambra governorship election under the platform of the Peoples Democratic Party (PDP), Senator Uche Ekwunife (Iyom) has assured that education would be a primary focus of her government if elected as the next governor of the State. She disclosed that she has crafted an agenda that is focused on revamping the education sector, promising that her government would rejig the education curriculum to produce people capable of solving contemporary world problems.

Making the above remarks on Wednesday, April 28, 2021, while commissioning a fully furnished Block Of 3 Classrooms she constructed at Udoeke Primary School Abagana, headquarters of Njikoka LGA of Anambra State, Iyom Uche Ekwunife, fondly called Alert Senator, remarked that Abagana community is one of the communities rich in human capital.

She noted that the project was a way of improving the educational infrastructure in the State and assured the people of Abagana of more projects as she strove to drive economic development and deliver dividends of democracy to the people.

The Igbo-Ukwu born Senator (Oji-Uno Emeogo) decried the state of infrastructure in some of the primary and secondary schools in the State. She noted that prioritizing education means making adequate budgetary allocations for the sector, facilitating training and retraining of teachers, introducing and supporting the use of ICT to enhance teaching and learning, providing necessary infrastructure and ensuring strict supervision and implementation of standards and practices, which according to her were essential to achieving academic excellence.

Sen. Ekwunife further enjoined the community to begin to take responsibility by ensuring that government projects were well executed by the contractors. She assured Abagana community that education would be the primary focus of her government if elected.

Welcoming the Senator, the traditional ruler of the community, HRM Igwe Patrick Mbamalu Okeke represented by the Chairman of the Caretaker Committee of the town, Hon. Linus Okafor-Okunwa described the project as remarkable, saying that it was one of the benefits of Ekwunife’s representation. He assured the Senator of the community’s continuous support in her political aspirations.

Speaking further, Hon. Okafor-Okunwa promised that the community would set up machinery for the maintenance of existing government projects in the community as advised by the Senator.

In a special address, a pupil of the school, Master Desmond Ubammadu who spoke on behalf of the students expressed joy over the project. He thanked God that through the generosity of Ekwunife the school has a new classroom block which would help their highly populated school. He prayed God to make Ekwunife the next governor of the state. 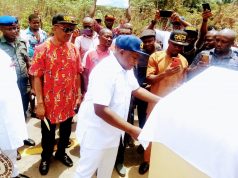 WE ASPIRE TO TRANSFORMATIONAL LEADERSHIP IN LAGOS – GOV. SANWO-OLU.