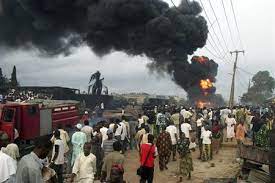 The National Emergency Management Agency (NEMA) has urged residents of Amuwo-Odofin to stay away from the ruptured pipeline of the Nigerian National Petroleum Corporation (NNPC). A rush of people besieged the site of NNPC ruptured pipeline on Friday to scoop diesel from the spillage.

Farinloye urged residents to stay away from the area, noting that their activities might lead to an explosion that might endanger their lives and that of residents of the area. Also joined in the rush to scoop from the spillage are local vendors who sell petroleum products in jerricans in the area.

Farinloye said report of diesel spillage from the pipeline and residents scooping the product in the area indicate serious danger which the residents must avoid.

According to him, NEMA had called on the Safety unit of the NNPC to shut down supply in order to control the flow to the area.

“We hereby urged the community and opinion leaders in the area to dissuade their people from scooping the product for their own safety immediately,” he said.

WTO DG: IT IS NIGERIA VS. S’ KOREA; OKONJO-IWEALA HAS OVERWHELMING ADVANTAGES OVER...

NIGERIA AT 60: WHY THE NATION IS STILL AT ROSSROADS.